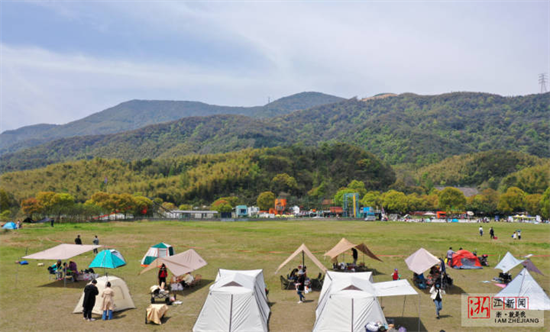 Tourists camp on a grassland in a mountainous area in Hangzhou, capital of East China’s Zhejiang province. [Photo/Zhejiang Daily]

The added value of Hangzhou’s service sector in the first half of this year was 612.1 billion yuan ($90.22 billion), a year-on-year rise of 5.4 percent, according to a report recently released by the Hangzhou statistics bureau.

Many firms have said that the growth can be partly attributed to a slew of measures taken by the government of Hangzhou.

During the COVID-19 outbreak earlier this year, Hangzhou launched a policy to provide rent exemptions for some small and medium-sized firms in the service sector to help them tide through the difficult period.

In addition to supporting policies, Hangzhou firms in the service sector have also launched distinctive products to attract customers.