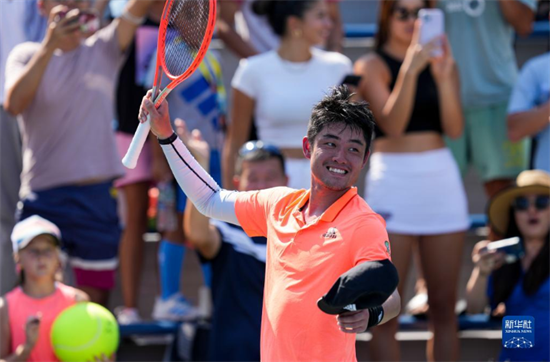 Wu Yibing of China celebrates after defeating Nikoloz Basilashvili of Georgia during the men’s singles first round on the first day of the 2022 US Open at the USTA Billie Jean King National Tennis Center on Monday in New York City. Xinhua

Wu Yibing on Monday became the first male tennis player from China in 63 years to win a Grand Slam tennis match with a victory at the US Open on Monday.

The 22-year-old qualifier upset No 31 seed Nikoloz Basilashvili 6-3, 6-4, 6-0. He blasted nine aces in his 31 winners past his Georgian opponent in the match at the USTA Billie Jean King National Tennis Center in Flushing Meadows, Queens.

“The third set, I don’t know if he was hurting or something, I just tried to make all the balls and tried to stay in the game, not thinking about winning or losing.

“That’s why I guess I didn’t show much emotion. I feel pretty calm,” he said.

Wu was grateful to be back at the US Open. 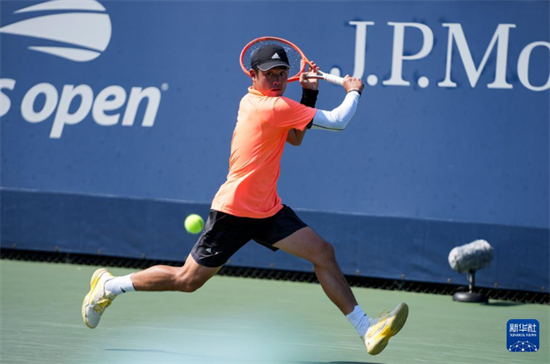 “I’m happy to be back here playing here in a major event since 2017, when I won here. It’s pretty special for me, but I’m just trying to play my tennis, show the people or myself that I still can play,” Wu said. “It’s been a tough few years for me. I really suffered from injuries and COVID in China. It seems like I can still play a little bit of tennis.

“I’m happy about what I did here. I love the people here, the crowd,” Wu said. “Many Chinese people came to support, I love it.”

Wu had played his way into the field through the qualifying tournament, joining countryman and fellow qualifier Zhang Zhizhen as the first Chinese men in the US Open main draw since the open era began in 1968.

Wu was almost joined in the second round by Zhang, China’s top-ranked player, but the 25-year-old was beaten by Tim van Rijthoven of the Netherlands, who saved seven match points in the third set to seal a 3-6 6-7, 7-6, 6-1, 6-4 victory.

“We are both pushing Chinese men’s tennis levels, and we’re still young. … I think we’re going to get to the Top 100,” Wu added.

Wu, who made it through three qualifying matches, now can walk in the footsteps of China’s Fu Chi Mei, who beat Ron Barnes in the first round of the 1959 Wimbledon Championships in England.

Wu is also the first Chinese man to win a US Open singles match since Cheng Guy did it in 1935.

Wu entered the US Open in good form, having won two ATP Challenger titles back to back. He also has soared in the rankings, moving from 1,869 in March to a career-high 174 now.

He was the world’s No 1 junior and clinched the boys’ singles and doubles titles at Flushing Meadows in 2017 to become the first Chinese male to win a Grand Slam title of any kind.

But it has not been an easy path for the prodigy, as he did not play from March 2019 to January 2022 due to injuries to his elbow, which required back, shoulder and wrist surgeries.

“I don’t really like to talk about those injuries in too (much) detail because every player has injuries,” Wu had told the ATP website. “The mental strength that you have to go through the pain is part of the game.”