The provincial flood control and typhoon and drought relief headquarters upgraded the typhoon emergency response to Level II, the second-highest, on Saturday.

According to the provincial department of agriculture and rural affairs, all fishing boats in Zhejiang, numbering more than 11,600, had returned to port as of Sunday afternoon, while over 1,600 people involved in mariculture had gone ashore. 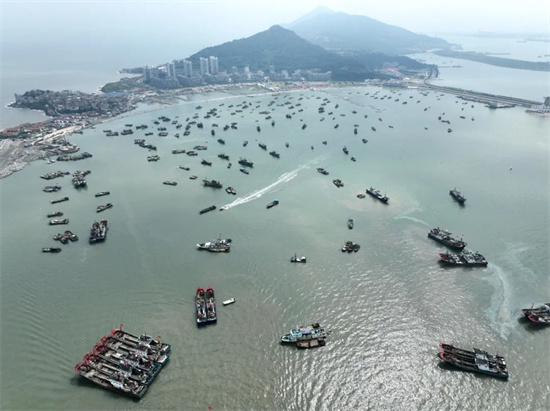 Many fishing boats are moored in the harbor to shelter from the typhoon in Lianyungang, East China’s Jiangsu province, Sept 4, 2022. [Photo/Xinhua]

More than 2,300 people have been evacuated to 170 relocation sites in the province.

As of 2 pm Sunday, Hinnamnor was identified as being around 395 km to the southeast of Zhujiajian Island, Zhejiang, and is forecast to move northwestward at a speed of 15 km per hour, said the provincial meteorological department.

“Although the likelihood of Hinnamnor making landfall in Zhejiang has been basically excluded, we should guard against the strong gusts and intense downpours brought by it, as well as secondary disasters,” said Zhou Lingli, a forecaster with Zhejiang provincial meteorological observatory.

Intense downpours and rainstorms have lashed many parts of Zhejiang, including the cities of Ningbo, Shaoxing and Jiaxing, since Saturday. From Saturday morning to Sunday morning, the precipitation in 11 townships and subdistricts exceeded 100