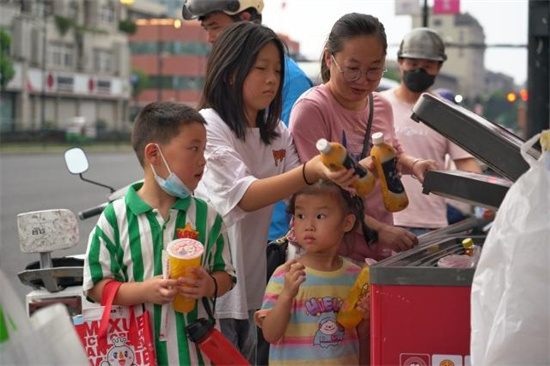 Passersby get free drinks from the freezer.

A charity freezer placed on a street in Lin’an district, Hangzhou recently went viral online as a livestream focusing on it gained over 12 million views, Hangzhou Daily reported.

Netizens were touched by passersby getting a free icy drink from a freezer on the dog days of summer while returning to donate boxes of free drinks, watermelons, and ice creams.

“I never expected that the freezer would one day become popular and get so many generous donations,” said Shi Jun, who came up with the idea for the charity freezer.

“I was inspired by my parents, who were once sanitation workers, and use the freezer to help people who have to work outdoors on scorching days,” Shi added.

A deliveryman gets a free drink from the freezer.

Her idea was put into practice in 2020, when she had to ask for donations from her friends. But the freezer wasn’t monitored and people stole drinks from it at night.

But Shi never considered giving up and her freezer became increasingly well-known.

Everything changed when a livestream was organized by local media on Aug 1. People around the world learned about the freezer and donated numerous drinks.

“I never thought that charity work required a lot of donations. I’m not that rich but can afford to donate some water,” Shi said. “The details I saw on the monitor made me feel that what I’m doing is worthwhile.” 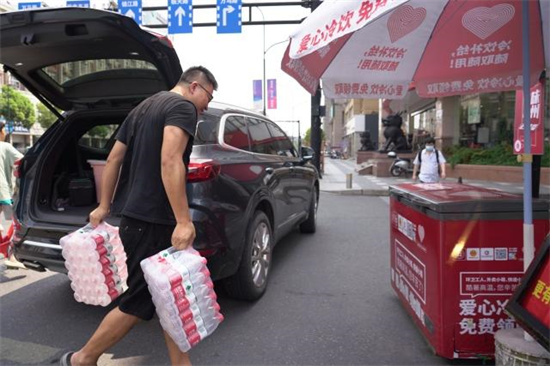 A local resident donates bottles of water to the freezer.