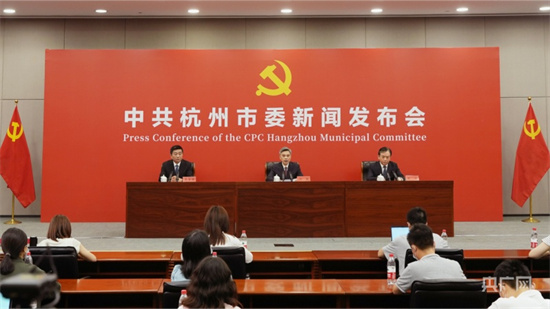 Photo by Ding Zike, an intern of CCTV

Hangzhou, Zhejiang province, has made remarkable progress since the 18th National Congress of the Communist Party of China in 2012, authorities said at a news conference held on Thursday.

Liu Jie, secretary of the CPC Hangzhou Municipal Committee, said that the city has successfully held influential activities such as the 2016 G20 Summit and has been organizing the 19th Asian Games Hangzhou 2022 and the Hangzhou 2022 Asian Para Games, with the city’s international popularity and influence increasing.

Hangzhou has played an active role in the high-quality development of the province. The city’s GDP increased from 797 billion yuan ($116 billion) in 2012 to 1,811 billion yuan in 2021, with an average annual growth of 7.9 percent.

The city’s business climate has bolstered market vitality and increased its attractiveness for talented young workers. The net inflow rate of talent — overseas talent and internet talent — ranked first in the country for many consecutive years, and the city has been selected as “the most attractive Chinese city in the eyes of foreign talents” for 11 consecutive years.

Hangzhou has six national entrepreneurship and innovation demonstration bases and 116 national-level incubators. Nearly 1 million new market entities have been established, and the total number of national high-tech enterprises exceeds 10,000. The number of top 500 private enterprises ranked first in the country for 19 consecutive years.

Hangzhou has also sustained its efforts in boosting the development of history and culture. In the past 10 years, the added value of Hangzhou’s cultural industry has increased from 48.4 billion yuan to 258.6 billion yuan.

As one of the most important economic zones in Zhejiang, Hangzhou is striving to achieve common prosperity through continuous efforts. In the past decade, the city’s average annual growth in per capita disposable income for urban and rural residents reached 8.2 percent and 10.8 percent, respectively.

Liu urged the city to improve its innovation capabilities, present its history and culture and build up an ecological civilization.