A heritage that is carved in stone 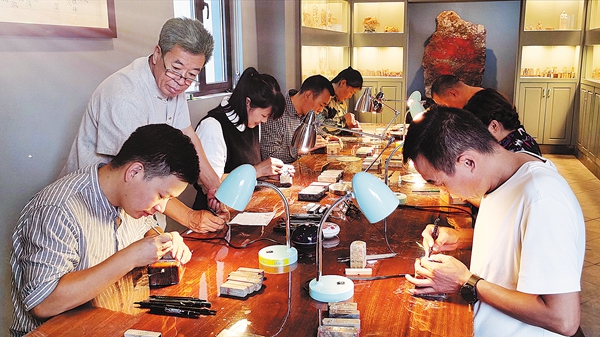 Craftsmen in Zhejiang province use their knowledge passed down over generations to mark the Asian Games in a manner that will stand the test of time, reports Ma Zhenhuan in Hangzhou.

As a national inheritor of the intangible cultural heritage of the chicken-blood stone carving technique and a master of Chinese arts and crafts, Qian Gaochao says: “It’s a great honor to be able to contribute to the Asian Games, held in my hometown, through my handicraft.” In the chicken-blood stone museum in Changhua town, Lin’an district, Qian Gaochao says that he is working on the other carvings related to the Asian Games. The previously postponed event will run from Sept 23 to Oct 8, 2023. This allows him more time and he is working on the carvings, featuring imagery of the equestrian competition, which is scheduled to be held in the Tonglu Equestrian Centre in Hangzhou.

Chicken-blood stone is one of the most prized ornamental materials in China and has been used for centuries to create carved works with characteristic red markings.

Stone for the carvings is found in the riverhead area of the West Zhejiang Grand Canyon in Lin’an. Geologists discovered that the quarry in the mountain was created by volcanic activity 75 million years ago. 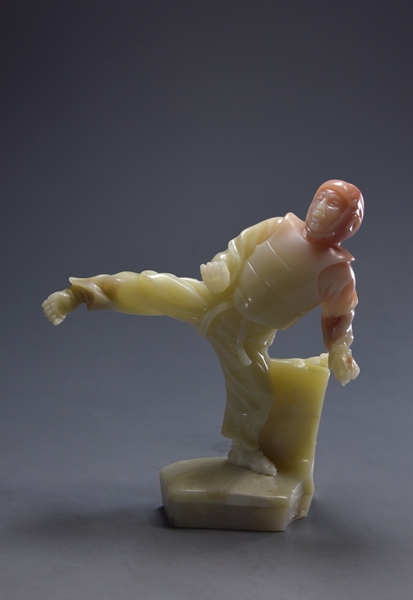 Changhua stone comes in many distinctive colors, including red, yellow, brown, white, sky blue, and green, among others. Ironically, the color of red chicken-blood is rare, thus very precious. With its vibrant blood-red color, bright crystal-like jade texture, quality and shape, chicken-blood stones are renowned the world over.

In 2008, the Changhua chicken-blood stone carving was added to the national intangible cultural heritage list, and it was also included in the first batch of national catalogs for the promotion of traditional craftsmanship. This was jointly issued by the Ministry of Culture and Tourism and the Ministry of Industry and Information Technology in 2018.

The artistic value of Changhua chicken-blood stone lies in its adaptability. It can be made into ornaments of various sizes and forms, such as pendants, rings, bracelets, necklaces, waist tags and other accessories.

It is not only a mineral specimen that records geological upheaval, but also a cultural relic that reflects the productivity of different eras, living conditions and folk customs. 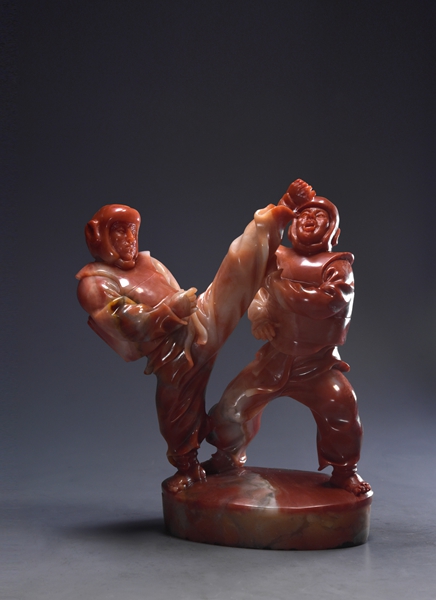 In September 2016, 36 sets of portrait seals, designed and produced by the chicken-blood stone museum, were given as gifts to guests who attended the 11th G20 Summit held in Hangzhou.

“I am a craftsman, so the content and themes chosen for my carvings keep up with the times, representing the style of the era,” Qian Gaochao says.

“I’m not only doing carving work, but also recording the development and changes of our society, and remembering the era through the medium of my carvings.”

Qian Gaochao has created fascinating works, many of which are related to important events in Chinese history, including the Zunyi Conference held in Guizhou province in January 1935. He has also done work to celebrate the centenary of the founding of the Communist Party of China and to mark the Site of the First National Congress of the CPC.

Qian Gaochao has also carved portraits of famous people who have made significant contributions to the country, including the 10 marshals and 10 generals, for their roles in the founding of the People’s Republic of China on Oct 1, 1949.

Other portraits include those of the late agronomist Yuan Longping, who devoted himself to agricultural education and research, pharmacologist Tu Youyou, the winner of the 2015 Nobel Prize in physiology or medicine for the discovery of artemisinin, and Huang Xuhua, chief designer of China’s first-generation nuclear submarines and a recipient in 2019 of the Medal of the Republic, the country’s top honor.

The use of Changhua stones dates back centuries.

According to research by experts of the Hangzhou Museum, which is based on the cultural relics unearthed from the Banshan tombs of the Warring States Period (475-221 BC), Changhua stones, in the Yue state, were mainly used for weapon-shaped ritual vessels, including sword heads, blades, vortex rings on the grip, cloud dragon patterns on scabbards, spears and daggers.

“We are also recruiting qualified people, such as graduates of the China Academy of Art, art teachers from Shaoxing University, and some calligraphy teachers, to continue to inherit and innovate these traditional skills,” Qian Gaochao says.